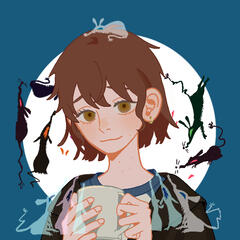 A Saltshaker is a Big Mood

DISCLAIMERS:Occasionally NSFW. I tag all NSFW posts I make, which will only ever be text. I do like NSFW art. I rarely repost it. Please choose to follow or not follow with this in mind.Please be cautioned that I also discuss my studies (my long journey to an eventual doctorate in forensic psychology) often. These include ethical, philosophical, scientific, and psychological perspectives on forensics and criminology. This subject matter can, of course, be disturbing, so broadly my blogs have a heavy/serious content warning. This also applies to some fandom content, as I ship many "problematic" ships with dark themes in addition to more light-hearted pairings.On my discourse accounts, I will discuss both opinions I disagree with, agree with, and some in between. Sometimes these opinions will come from the same person, even! I do talk often with people I disagree with on some things and agree with on others. My blog is about individual opinions, and unless stated otherwise, I'm not talking about anything but the original post in question. I do not stalk people's posts and beliefs before engaging with them. If I am talking with someone and you think I'm not disagreeing with them enough (whether I concede points, don't curse at them, don't seem vitriolic, etc.), this doesn't mean I endorse everything they've done. Obviously. Don't assume I endorse or do not endorse anyone I am discoursing with. Thank you.With that said, here's my about page!:Hi! You can call me Mouse, or Thomas/Tom, if you'd rather. (My femme name is for close friends and family). 24yo half-Brit, half-American, of Jewish descent, 100% exhausted. Pro ship, pro fujin, anti REG.I am a tired forensic psych major who specialises in studying criminal rehabilitation. Stuck in academia hell until COVID lets me graduate, so, yes, I will find that obscure study for you at 4am. I started discoursing on Tumblr in 2016-ish, and made the now-purged original blog antis-delete-your-blogs-pls in 2017. I've since moved around a few blogs, but you can find me @adybpt (adybpty is saved if I get sniped) on twitter and antis-delete-your-blogs-pls-thx (replace the thx with ty for backup) on Tumblr.I have been in fandom hell since 2011, and you can find me across many different series and mediums. My favourites usually have to do with sci-fi, horror, and mystery. Yes, I write a whole lot of fanfic! If you'd like to read my fics, feel free to check them out! Please heed the AO3 warnings.I take questions/comments at my Tumblr, or on my curiouscat.I also run a pro-ship Discord server! Feel free to send an ask to @adybpt-proship-discord on Tumblr if you'd like to be invited! If you don't have a Tumblr, feel free to @ my Twitter acc, but responses may be slower. I don't mind being pinged multiple times if I miss you the first time.I am bigender transmasc (any pronouns), poly, panromantic on the grey asexual/caedsexual spectrum, and identify as queer. (If you're here to call me a snowflake, go ahead lmao, specific labels are helpful for my autistic ass).I am neurodivergent (GAD, OCD, ADHD, ASD, and depression are professional diagnoses. I also have CPTSD, but since it's not diagnosable in the US, I cannot get a professional DX). I am an emotional abuse, psychological abuse, and sexual coercion survivor. Because of this, I primarily use dark fiction to cope, but I obviously support any and all fans, coping or not.I am disclosing the above in detail, despite not owing anyone an explanation, because I am comfortable being open about my abuse and my struggles in order to spread awareness. But if you try to get other pro shippers to reveal their trauma/mental health issues to you in order to "validate" whether they're "allowed" to ship certain things, fuck you. We don't owe you shit.Other than simply being pro ship, I am anti-radfem, sex positive, pro-sex worker, and pro-kink (being a dom myself). I am very much against anyone who thinks they should control and police anyone's sexuality, especially women's.Because of my experiences with being neurodivergent and having to deal with ableism, I'm firmly against cringe culture. I support any and all things people label as "cringy", including (but not limited to): otherkin, fictives, self-insert ships, comfort characters, furries, whatever else the internet thinks it's fun to hate on next.I am libleft politically, aka solidly on the green square of the political compass. I'm against REGs, bigots, and authoritarians in general, which, coupled with my major, is why I got into discourse in the first place.I don't really have any DNIs (please reserve your own judgement on whether you'd like to interact with my content), so this is basically my RBF. I've been doing this so long, nothing shocks me anymore. My triggers are related to emotional abuse/abusive relationships, threats of physical violence or sexual abuse (mainly directed towards others), and wanting sexual submission from AFAB people. I also have emetophobia, but sending me gore, vomit, or whatever will not trigger me (or make me, the forensics major, blink twice), so don't bother. You guys have tried it so many times, and yet I keep having to say, attempts to trigger me are only effective if you're someone whose opinion I value. Random anon hate is useless. I literally could not care less what people who send hate messages think.